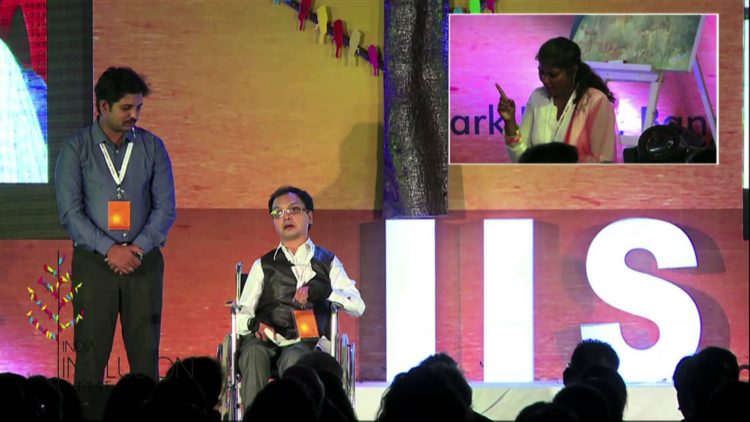 Yet another year has passed, and yet again we are feeling withdrawal symptoms after the most awaited celebration of the year – the India Inclusion Summit (IIS).

The IIS was started 6 years ago with the mission statement of making India inclusive by 2030. For this to happen, it was important for IIS to transform from just an event to a movement. With that in mind, the core team decided to change the format of the event. It was decided that the Fund Raising event would be replaced by a Friend Raising circle, which consisted of 78 participants.

Joining Hands For A Good Cause

The first question that most people asked was – why were only 78 people invited? The answer is a historical one. The Dandi March of 1930 began with 78 participants and was indeed a major step towards independent India. It was a movement that was triggered by deep internal conviction.

The passion for inclusion that the core team of IIS shares can be compared to the depth of feeling that freedom fighters had for our country’s independence.

There were also people who wondered why we chose a circle. A circle has no start or end, and hence it signifies equality. Participants of the circle – no matter what walk of life they come from and what designation they hold – are treated equally.

The most important aspect of the circle was the lack of agenda or action items. The idea was to embrace the collective wisdom of the 78 invitees and see what emerges out of the discussion.

The event began with a heartwarming speech by Preethi Srinivasan and was followed by extraordinary speakers. The dictionary is short of words to describe all of it. Expressions like ‘mind-blowing’ and ‘amazing’ are understatements when used to describe a personality like Preethi’s. She is as adorable as she is calm, composed and internally enlightened. She is full of energy and believes in using it to transform the lives of others. She believes in doing kind acts while one can because your life can change in a split second and nothing is permanent.

This is something she has understood from her personal experience. From becoming the youngest player on the senior state-level women’s cricket team at the age of 8, Preethi has always excelled. She was exceptional at whatever she did. But all of it changed in the course of a day, when she suffered a spinal cord injury that left her paralysed below the neck.

The injury was severe enough to hurt her spine, but couldn’t break her high flying spirit. It actually made her stronger than ever. She now runs a non- profit that enables women with spinal cord injuries and helps them live a life of dignity.

Discussing Disability On An International Scale

Preethi had the privilege of introducing the next speaker – the legendary Tom Richard Harkins, popularly known as Senator Harkins. Harkins was elected to the US Senate multiple times and was also a U.S. presidential candidate in the 90’s. He is an inspiration and a true inclusion missionary.

Tom was responsible for the hard work behind getting the Disability Act passed in the U.S, a piece of legislation that is considered one of the best governance acts in support of people with special needs. During his brief speech, Tom narrated the story of his personal connection with disability.

It was his elder brother, a person with a hearing impairment, who inspired the ex-Senator to connect with the cause. When his brother graduated from high school, he wasn’t given many options career-wise. He ended up becoming a baker.

Frank Harkins loved to work with machines but because of his disability, he was never given the opportunity. Years later, a regular customer of the bakery he worked in, wanted to compliment him for the yummy edibles he baked. He tried talking to him, but quickly realised that he had a disability. They ended up communicating through notes.

The customer was shocked that Frank disliked his profession, but was also happy to know that the baker wished to work with machines. As the customer owned a factory that manufactured aircraft nozzles, he happily offered the baker a job, which was gladly accepted. Soon Frank proved his mettle at his new job, when others with much more experience made errors.

They soon realised that he was doing so well because he was very focused. And the reason he was able to do so was his deafness! While other employees found it difficult to concentrate amidst the noise in the manufacturing unit, the former baker worked in total silence. His weakness had suddenly become his strength.

As the discussion went ahead, the 78 broke into smaller circles. Every circle was asked to ponder a few questions – How do they visualise an inclusive society? And what are the building blocks to create one?

From the collective wisdom absorbed from discussions across the smaller groups, and from the larger circle; FIDAA was the emergence.

The freedom to lead a life with dignity is important, and for this to occur awareness has to be created, and the community has to act to make the dream of an inclusive world a reality.

Now if we add dignity and acceptance to the mix, it is the perfect combination for an inclusive society. It is only when disabled people and the community around them accept the situation with dignity that they can look for and find solutions to their challenges.

This means that society, the community around us, needs to move from sympathy to empathy and then to compassion. But we need to know and acknowledge that the line between compassion and pity is a fine one.

All four  – freedom, independence, dignity and acceptance – are put together, and what we get is “FIDA”. FIDA in Hindi means devotion or something to die for. We really believe that we can build a society that encompasses FIDA and is inclusive.

A few facts to ponder over:

In the Rio Olympics 2016, not one or two but four of the para-athletes ran faster than the so-called normal athletes to complete the 10k race.

Over the past few decades, 14 actors won Oscars for their roles as persons with disabilities.

Food for thought! What needs to change? The never quit attitude of the differently abled? Or the community who is reluctant to give these fighters the opportunity to lead a life with dignity?