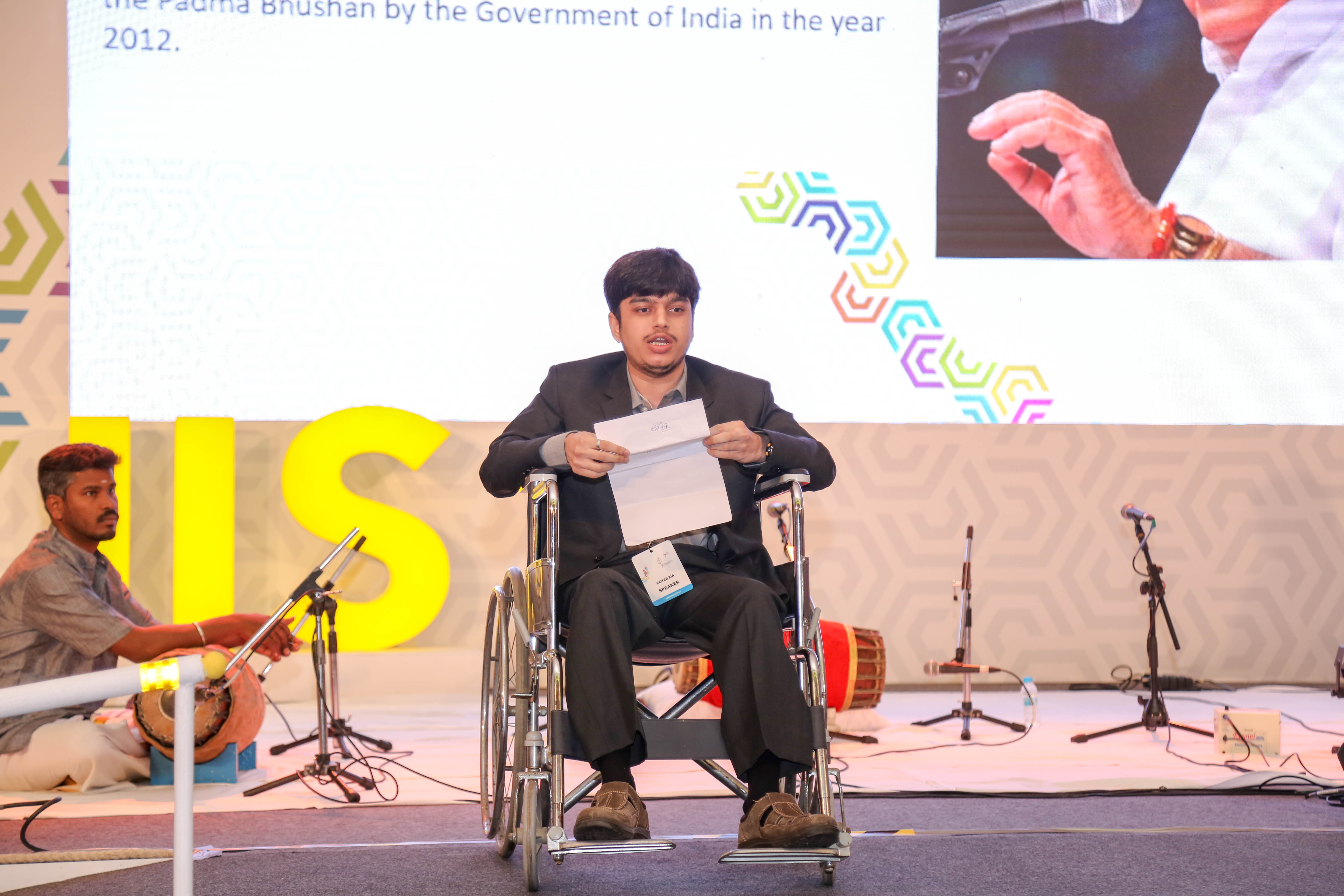 Few can resist an “exclusive offer”. It makes you feel you’re getting special treatment. But what if you received an offer of inclusion? A chance to inhabit a space where everyone (and hence no one!) gets special treatment? I’ll stop talking in riddles. When I attended the Indian Inclusion Summit 2018 – my first time at this annual event held since 2012 – I was part of the minority. Because the majority were persons with disabilities (PWDs).

The motto of the summit: “Everyone is good at something.” Who organised it? You might wonder. Because there were no logos, no banners of corporate sponsors, only scores of eager young volunteers welcoming you. No self-congratulatory announcements from the podium, only a smoothly rolling series of segments, each hosted by a PWD and featuring PWD speakers who were then felicitated by PWDs. There were sign language interpreters on stage and live audio transcriptions on screens. If you had registered as a PWD you were assigned a buddy who was at your beck and call, whether it be to help you to a seat, or to the ‘disabled’ toilet, or to the reserved dining section at lunchtime.

The majority at the summit had a term for the minority, for someone like me: ‘typical’ or ‘average’. Not exactly an ego-massage, eh? While we’re on the subject of terms, here’s a 30-second primer for all you typical types: ‘handicapped’ is ancient history, ‘disabled’ is so yesterday, and don’t you go using cutesy words like ‘special’ or ‘challenged’. WHO calls them ‘differently abled’, but if you ask PWDs to identify themselves they would each do it in their own unique way. “I am blind,” they might tell you, or “I am deaf”. Or partially sighted, or hearing impaired, or person with cerebral palsy, or any other term they use to most accurately describe their – I almost said ‘condition’ – their identity, I mean. It’s an identity they claim with dignity and assurance.

Their journey to self-hood has been incredibly grueling, but hearing about it simply takes your breath away. The speakers at IIS 2018 at the Radisson Blu hotel on November 18 were from different continents but they spoke the same language – the language of resilience and determination. They had left victim-hood far behind them; they had gone beyond surviving to thriving; they were activists and global leaders and role models now. Many of them possessed what Chally Grundwag and his research team call ‘coolabilities’: enhanced abilities in disabling conditions. Software engineer T.R. Sridhar’s coolability was on display: a painting of a vividly multi-hued tree that everyone on stage took turns to autograph.

The language of resilience was spiked with wit and humour. For instance, you heard it when Yetnebersh Nigussi from Ethiopia joyfully declared, “I am a billionaire!” The lawyer and Right Livelihood Award winner who went blind at age five explained, “I am one of a billion because WHO says there are one billion disabled in the world.” You heard it when 25-year-old Zoology professor Zoyeb Zia who contracted the rare disease ataxia when he was 15, narrated how his eye movements, slurred speech and wobbly gait evinced “the classic symptoms of being drunk”. He added (in case his wheelchair fooled you), “I don’t let my disability come in the way of doing what I love: swimming, gaming, exploring restaurants and food spots.” You heard it when Caroline Casey, the first female mahout from the west, who is legally blind and who has “always wanted to be Mowgli”, passionately told the audience, “You get a second chance every day of your lives.” And you heard it when disability rights activist Swarnalatha, whose multiple sclerosis spurred her into a dizzying array of achievements, said perkily, “I am Limited Edition!”

“You get a second chance every day of your lives “

There was laughter, music, cheering and dancing. The energy level only increased towards evening. If 83-year-old Carnatic and Hindustani musician T.V. Gopalakrishnan had put you in a meditative mood in the morning, playback singer K.S. Chitra’s multilingual repertoire galvanized you into a frenzy of applause. Swarnalatha’s questions to Suhasini Manirathnam and her ready quips left you in splits. Somewhere in between an unscheduled table and birthday cake were whisked onto the dais, much to the surprise of Mumbai-based N. Ramakrishnan or RK as he likes to be called. RK, whose cerebral palsy left him with the ability to move just two toes of one foot, is a well-known foot-painting artist from Mumbai. The organizers had discovered that it was his birthday and he was wheeled onstage to thumping music and thunderous applause.

And the party rocked on… You didn’t guess before you started reading this post on disability that the word “party” would figure in it, did you? You’re probably kicking yourself for having missed out on the fun. Never mind, there’s always next year.

Written by
C.K. Meena, a journalist, novelist and columnist whose fortnightly column City Lights ran in The Hindu for 14 years. Written by She is the author of Black Lentil Doughnuts (2005), Dreams for the Dying (2008) and Seven Days to Somewhere (2012)