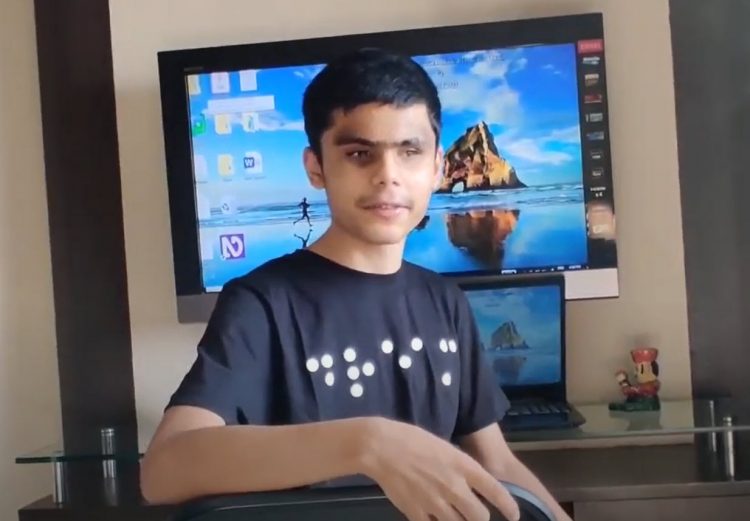 Pranav Savla, a 15-year-old Bangalore student who was born blind, was the guest speaker at the Art For Inclusion (AFI) Inspiring Talk Series presented by India Inclusion Foundation on 5 June 2021. All the AFI 2019 and 2020 artists joined the 11.30 a.m. video conference to listen to his speech titled ”Follow your Passion”. 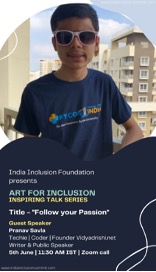 Pranav’s blindness was caused by a medical condition called LCA (Leber Congenital Amaurosis). He said that with the support of his parents and school faculty, his blindness hasn’t stopped him in any way from doing what he loves.

The meeting started with a video of AFI 2019 in which Pranav had given a video byte after experiencing the accessible paintings exhibited in the gallery at Radisson Hotel on 16 November 2019. Then Karthik initiated a conversation which began with Pranav introducing himself and sharing a funny story of how his diagnosis came to light. His parents, on noticing that he wasn’t watching television, thought he had a hearing problem and took him to an ENT specialist! It was only later that they got to know he couldn’t see because of LCA.

Pranav spoke about his childhood memories and interests such as cricket, playing tabla, and singing. He described the bond he shared with his elder sister and stressed on the importance of friendship, narrating personal stories of friends who were an integral part of his life. 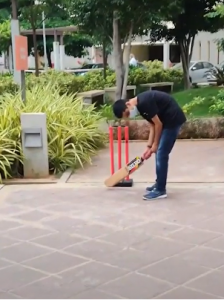 Assistive technology played an important role in Pranav’s life. He related how various technologies and applications helped him navigate during his childhood and was full of praise for his school, Head Start Academy, which provided inclusive education. He cited an example of how the school revamped their school website in one week to make it accessible to those using screen readers.

After sharing personal stories of his use of smartphones and different applications, Pranav spoke of how he became a software programmer. He said that when the organization Vision Aid helped him learn programming, it was a breakthrough in his life in 2018 when he decided to pursue his passion in the Information Technology space. 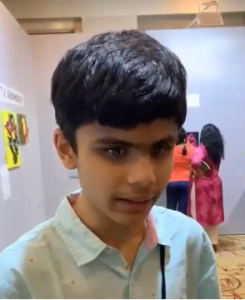 Pranav along with his visually impaired friends founded www.vidyadrishti.net . VidyaDrishti is one of India’s first read/write book communities for people with and without visual impairment. It combines literature with tech to provide your student or child, between the ages of 8 and 25, an immersive learning experience.

Next, Pranav gave our AFI Fellows some tips on using technology in the Art space. He described how simple applications like Microsoft Paint, Canvas, and 3D viewer could be used for designing art, which could then be marketed using social media applications like Facebook, Twitter and Instagram.

Finally, Pranav shared his message on the Importance of Communication and Passion in Life. “Once you are able to communicate, you can inspire many people to believe in what you believe,” he said. “If you can’t explain what you are doing in an easy to understand way, then you do not really understand what you do. Words go very far. Steve Jobs became my idol after I heard his commencement speech.”

He defined passion as “having a purpose”, and he advised his audience to meet up with others who believe in the same purpose. “The only way we can make the world a better place is to focus on the field that we are passionate about,” he said.

Pranav ended the meeting with a Q&A session. The AFI team and Fellows felt that his was a highly inspiring talk that was much needed in these challenging times.

Pranav runs a youtube channel called BrailleMate. Do watch the cool informative videos and share with your friends and family. You can reach out to Pranav Savla at his LinkedIn account.