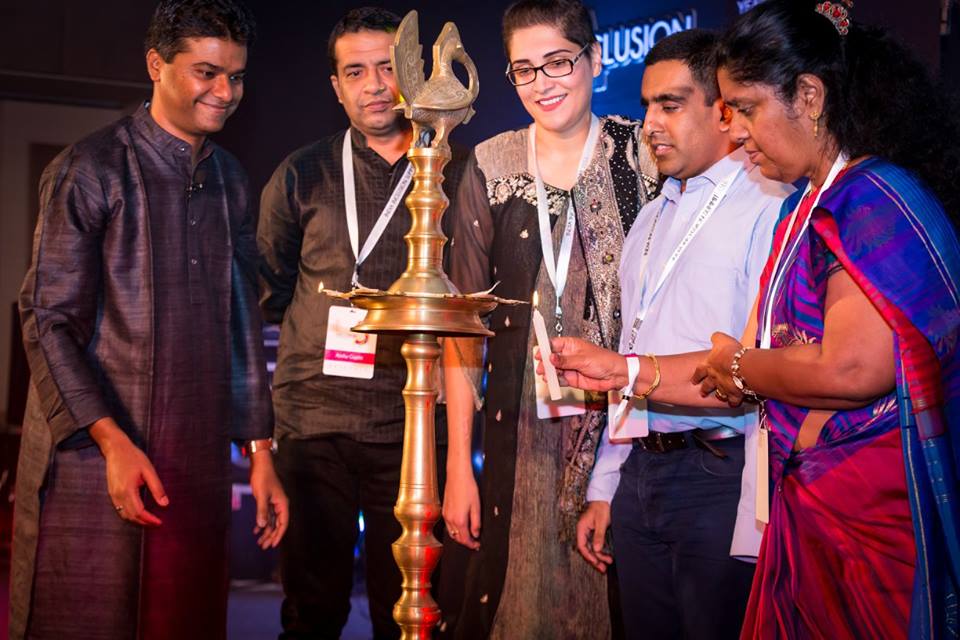 The presentation opened up to a grandeur performance by Ghatam Suresh Vaidyanathan, a top ranked ghatam and multi-percussion artist, with his renowned drummers and musicians. When they wrapped their elite performance with the drum jam, the entire audience gave them a standing ovation. Suresh quoted that the greed, selfishness, and negative feelings within a person are what makes a person differently-abled. His disability did not stop him from achieving the honors of the Youngest Ghatam Player, a Sangeetha Vidvat Sironmani, and a Aastana Vidwan, a fellowship from the Govt. of India, just to name a few.

Pranav Lal, a technology enthusiast, known as a blind photographer by India Today, working as a cybersecurity expert, unveiled the possibility of seeing with sound using vOICe, which converts light into sound. He confidently says; I am pushing boundaries; not only for myself, but for everyone else. Pranav hosted the show for the next hour presenting S Vaidyanathan and Meera Shenoy on stage.

S Vaidyanathan had a spinal injury during his IIM years as a youth and was bounded to a wheelchair, but his brave determination to always look ahead in life pushed him to complete his MBA at IIM and work as a professional. He later founded The Ganga Trust, and also works for the Spinal Foundation helping people with spinal cord injuries. He participates in wheelchair marathons, and is fighting for inclusions of disabled people in mainline marathons. He directed the audience’s attention to the importance of rehabilitation centers and retaining the talent. It is not about physical facilities and capital equipment, but more about retaining trained staff of nurses, doctors, and physiotherapists, by making it a lucrative career option for people in India. He suggested that if corporates can set aside 40% of its CSR budget towards this cause, India can be a lot inclusive.

Meera Shenoy, an eminent social change maker, founder of Youth4Jobs, has dedicated her life to skilling underprivileged youth for jobs. Her motto is to bring poor families out of poverty. She talked about financial independence quoting how Kameshwari – a speech and hearing impaired person, who was married to another speech and hearing impaired person – after being trained at Youth4Jobs, now works at Google and her husband at Max, earning more than a lakh per month.

It was an honor to have Dr. Rajdeep Manwani host the event. He lost his sight while he was in class 8, and that did not stop him from his triple post-graduation, a doctorate, distinguished toastmaster award, a presidential award, and many state awards. He also holds the record of being adjudged the best impromptu speaker for four years in India and Sri Lanka. He shared a personal story of his grandfather’s response to people’s concern on his blindness – It doesn’t matter that my grandson cannot see. There will be a day when the world will see my grandson. Rajdeep has surely made his granddad proud. A positive attitude towards a situation can open up many possibilities, and giving in to challenges only closes all doors towards light. He asked “You have landed at IIS. Have you arrived?” and said that you will, only when you think positive and be inclusive.

He hosted the show for the rest of the morning introducing the follow on speakers. Anshu Gupta founded Goonj, an NGO that uses the under-utilized material as a resource to reach out to clothing needs of rural India. He considers winter as a disaster – as much as earthquake or floods – as many people die in cold weather. His organization uses clothes as a currency to involve people in community work, say cleaning of Dal Lake. He says, 500-1000 such activities are organized each year. He urges that we should look beyond and talk about taboo issues, say sanitary problems for rural women, and public toilets having no access to wheelchairs.

V R Ferose, the founder of India Inclusion Summit, works relentlessly on the cause, been the Managing Director of SAP Labs India, featured in The Economic Times-Spencer Stuart ’40 under 40′ listing of India’s hottest young executives, is currently the global senior vice president and Head of Globalization Service for SAP. He is also a director on the Board of Specialist People Foundation, and is on the panel of “The Vision Group on Information Technology”, Government of Karnataka. He is also co-founder of the Karnataka chapter of Global Shapers, which works to create leadership amongst the youth. Ferose introduced the coach Satya Narayanan, who trains young people for Paralympics and helped them win gold, silver, and bronze medals for India. The coach and Mariappan who won gold at Rio Paralympics were felicitated with a standing ovation, and a canvas painting of Mariappan was created live on stage by the Asia’s speed painter Vilas Rao Nayak

Brent Vaughan, CEO of Cognoa that has built an app to help identify autism in children, and support parents understand the problems early, thereby making facilitating treatment during the critical years. He alerted about the alarming increase in children in the autistic sphere, and suggests that early screening at 18 months helps alleviate the issues and bring children to mainstream learning.

Vijay Prakash, a multilingual singer with many awards on his side, believes that music is the language of God. He has also lent his voice to the theme song of IIS, and gave us an electrifying experience with his songs.

Renowned authors who work on the cause of inclusion participated at the Meet the Authors corner, enthusiastically signing autographs, taking selfies with their readers, and answering their questions.
The Shiva Trilogy, Scion of Ikshvaku – Amish Tripathi
Gifted – Ferose V R and Sudha Menon (Also penned Leading Ladies, Legacy)
You Can – Dr. Prasad Kaipa and Meera Shenoy
Because Life is a Gift – Disha Chabbra

Post lunch, the cheerful and beautiful Priyanka Aggarwal, leader of Employee Business Resource Group (BRG) for Persons with Disabilities in IBM India, put on the hosting hat and danced to the tune of ‘Aaja Nachle’. She narrated her struggles to reach this stage in her life, and said that she does not fear failure, and has nothing to lose in life.

It was a delight to watch the leaders and authors Amish and Ferose exchange words and insights into the importance of inclusion, how changing perspective to something can help you respect the diversity, the modern paradigm of charity with an ancient belief, where the person giving charity is thankful that his debt (of karma) is cleared, and the one receiving wants to help others so he can clear the debts he received.

Felisia Shafiq, working at SAP software support, is part of the Canadian sitting volleyball team which won the bronze medal at the Toronto 2015 Parapan Games, and also participated in the Rio Paralympics. She lost both her legs in 2011. She says that with the love and support of family, friends and SAP, she not only got back to normalcy in life, but reaches out and offers help to the community, and is pursuing her dreams in the field of sports. She suggest that if one has a disability, to ask for help and be open to opportunities, and for the others to contribute love and support as this is what will get all of us included.

Haben Girma is an internationally acclaimed accessibility leader, recognized as Forbes 30 under 30, and the first deaf-blind women graduate from Harvard. She works at SAP as the Accessibility and Inclusion Advocate, who proclaims that difference is an asset, and exploration leads to innovation. She urges people to design accessible software. It benefits disabled people, and brings revenue to the abled. She took a selfie with the audience showing off ‘I love you’ in the sign language.

IIS 2016 released a braille magazine by Upasana through Haben. Rajdeep, Pranav, and Priyanka too received a copy.

Pankajam Sridevi, managing director of ANZ, Trustee of India Inclusion Summit, closed the presentation thanking all the enthusiastic volunteers who have worked ceaselessly, and the NGOs who came together to make this event possible, and also thanked Cisco for making live streaming of the event possible. She also announced that next year the event will be hosted by Allegius supported by SAP and ANZ.