The silent power of visual expression 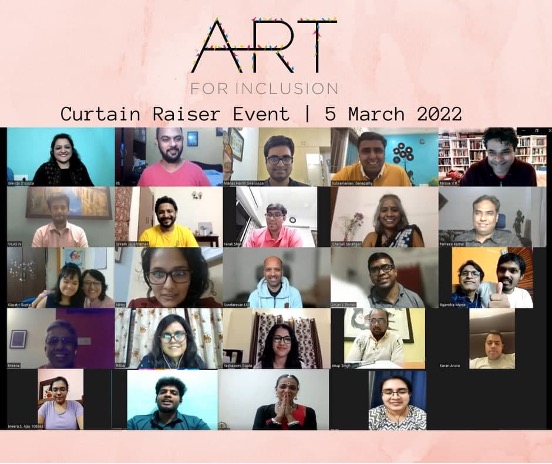 Different art movements such as realism, surrealism, impressionism, post impressionism and abstract expressionism appear to have influenced the nine artists chosen for the 2022 Art for Inclusion (AFI) Fellowship. The funny thing, though, is that most of them have had no formal training in art! They never thought about theoretical definitions when they picked up the pencil, paintbrush or palette knife and released the emotions seated in their heart.

The virtual launch of the Fellowship on 5 March demonstrated how the vocal and the verbal are not the only modes of expression, and how the visual and the spatial can convey implied meaning. In the event curated by Snehadhara Foundation, the renowned Odissi dancer Dr Prachi Jariwala choreographed and executed the movements that matched the verses written by Vibha Bhat, which in turn were inspired by the art works submitted by the Fellows. (The poems were read out by Yashaswini and rendered into Indian Sign Language by interpreter Glenda D’Souza.)

Anjan Satheesh from Ernakulam, Rupak Munje from Chennai, and Gayatri Gupta and Karan Arora from Bengaluru showed us that words and speech aren’t essential to communication. Gayatri, a photographer and aspiring film-maker with Down Syndrome, is extremely shy by nature, and after persistent coaxing, read out her description of herself and her art in a soft voice. She works with acrylic paints and her “Moonlit Forest” speaks louder than words. 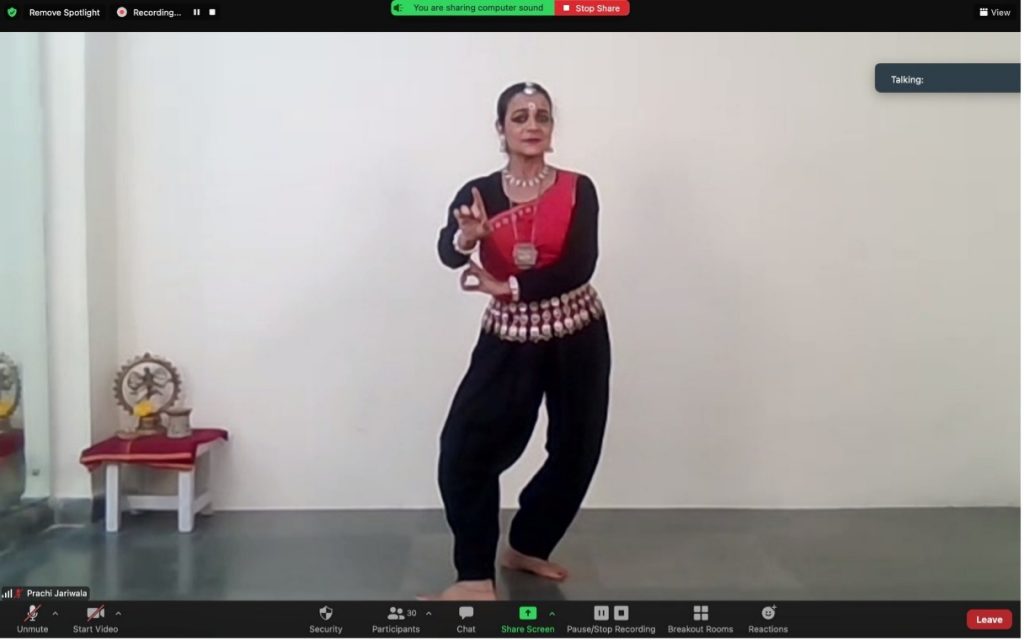 Anjan’s father spoke on his behalf since he has multiple disabilities including Cerebral Palsy and impairments of vision, speech, hearing and movement. Anjan, who won a national award in 2015, has met film stars, cricketers and other celebrities but his most memorable encounter was in 2005 with President APJ Abdul Kalam. While caricatures are his forte, he had submitted a painting for the Fellowship: “Stars over sky”.

Like Anjan, Rupak too used his father Rajendra Munje as a mouthpiece. Rupak, who is non-verbal and on the autism spectrum, conveys the message of ecological disaster through his “Sea of Change”, Rajendra explained. He said he had quit a career in advertising to focus on his son, and that their whole family plays a supporting role.

Karan is a speech and hearing impaired artist from Bengaluru who works as a UX Specialist in Dell and has a Masters in graphic design from the National Institute of Design in Ahmedabad. “Benares Ghat” gives you a view of boats on the Ganges at the famous ‘burning ghats’ of Varanasi.

A black-and-white sketch of a little girl with luminous eyes is what Meera S Ajay from Thiruvananthapuram, Kerala had submitted. She had titled it appropriately, “Wonder in the Eyes”. Meera, who has Muscular Dystrophy, says she sketches, draws and paints.

Ritika Gupta from Gaya in Bihar, who sketches, doodles and paints, had submitted the cheerful “My Yellow Sunflowers”, a variation on Vincent Van Gogh’s post-Impressionistic “Sunflowers”. Ritika received all-round applause when she mentioned that she had just landed her first job – no small achievement for a person with autism.

Parveen Kumar from Punjab, a polio survivor and an assistant professor of Fine Arts in Ludhiana, demonstrated his penchant for abstract art through his painting, “Double-faced”. Anup Kumar Singh, another polio survivor, has a B.A. in Fine Arts and teaches at a central government school in Uttarakhand. The award-winning artist had submitted a surrealist painting titled “Bees”.

Muthamizh Selvan from Ramanathapuram in Tamil Nadu entranced everyone with his life story. Speaking in his mother-tongue, Tamizh, he narrated how in college, a girl had been attracted to him but he didn’t take it seriously. Then he had a train accident and both legs were amputated. He thought his life was over, but that same girl contacted him, stood by him, and encouraged him to take up an activity. He started drawing, sketching and painting, and now she is his wife! Muthamizh explained that his painting “Nature”, which portrays a woman walking down a forest path, represents his wife leading the way for him.

Audience watching the Art For Inclusion 2022 art gallery inaugurated during the event.

Written by C.K. Meena, a journalist, novelist and columnist whose fortnightly column City Lights ran in The Hindu for 14 years. She is the author of Black Lentil Doughnuts (2005), Dreams for the Dying (2008), Seven Days to Somewhere (2012) and The Invisible Majority (2021)