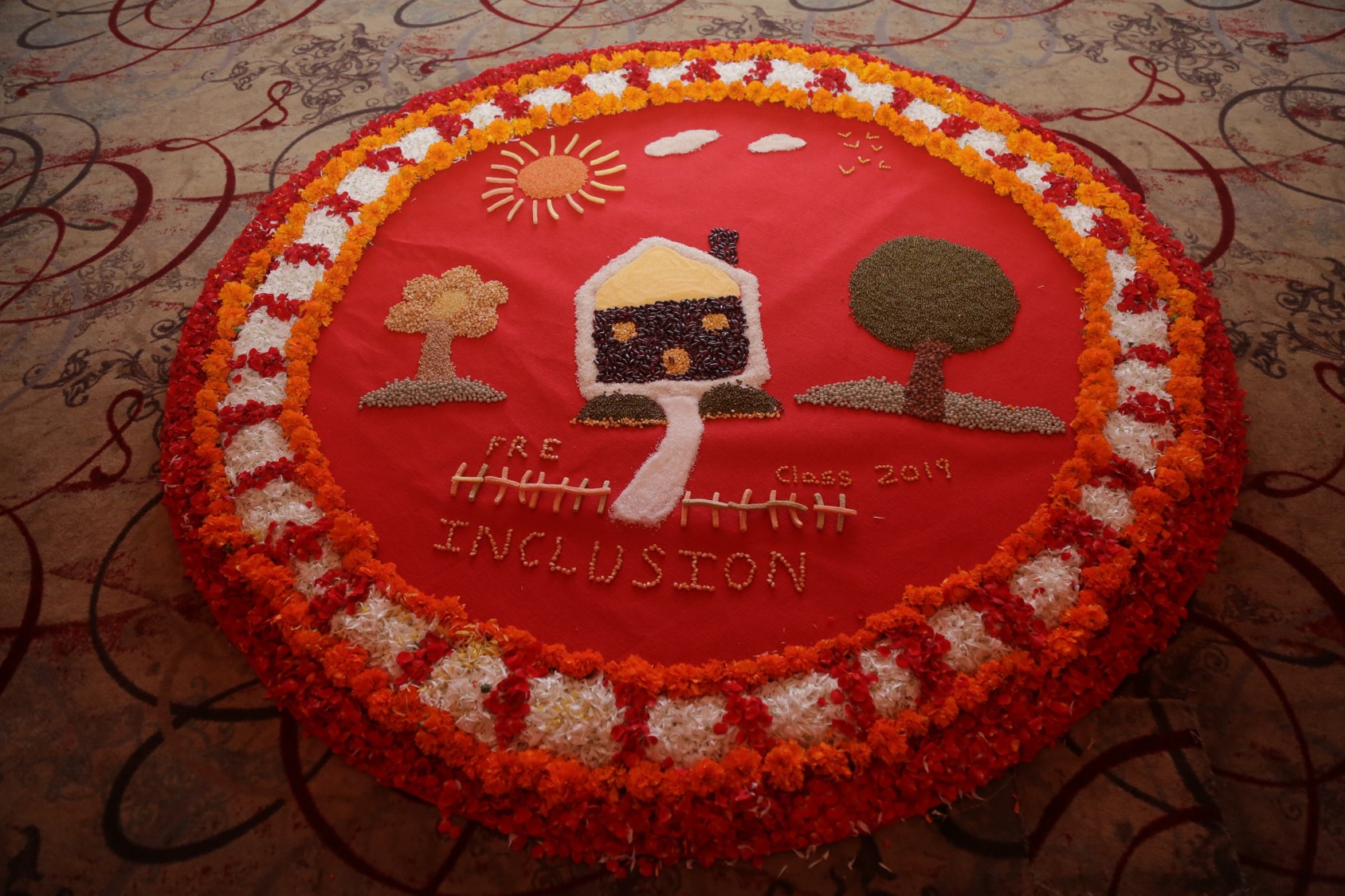 There was simply no getting away from the theme of inclusion during IIS 2019 — not that anyone wanted to! The message permeated every part of the Summit including the lead-up to the main event, the “Friend Raising Evening”. Art was one of the tools used to bring a sense of inclusion as one by one the 78 special invitees were led blindfolded into the room where the tactile art exhibition was set up. As they felt the different shapes and textures with their fingertips, each painting expressed a thousand emotions in its own silent way.

The circle of friends formed around a beautiful Rangoli that symbolized the theme of the evening: inclusive education. It was an arrangement of grains and flowers that pictured a scenic morning in nature, one of the most common images that schoolkids think of. The moderators for the evening were the writer and Gandhian Rajni Bakshi and the dynamic Vaibhav Kothari who spoke via his interpreter-companion.

As the circle watched a muted scene from the blockbuster Hollywood animation movie “Kung-Fu Panda”, even those who had seen the movie multiple times found it next to impossible to follow the action. The same scene played with subtitles emphasized the importance of accessibility in our journey towards inclusion.

VR Ferose gave a personal example of how even countries with the strongest economies in the world struggle to bring in inclusion. His son Vivaan’s class teacher in the US thought he didn’t know the alphabet because he did not display his comprehension skills in the manner she expected. Since he is on the autism spectrum, non-verbal, and has fine motor issues that prevent him from writing, when the teacher asked him to point to ‘A’ he could not do so every time she asked because he had limited control over his hand movements. And only after he had identified ‘A’ would she proceed to ‘B’.

At home, Ferose and his wife Deepali were trying out the Rapid Prompt Method which involved him pointing to a letterboard. The couple had a nickname for Vivaan, Chungoo. One evening Ferose asked Vivaan whether he liked to be called Chungoo. He shook his head, ‘no’.  What nickname would he like, then? He began to point to letters on the board. The couple was perplexed when he clearly spelled out ‘MARCOPOLO’. And why did he like that name? He replied, “Because I want to explore.”

It was an emotional moment, a breakthrough for Vivaan. He is 11 now and at home he writes poetry, said Ferose. A boy with much higher cognitive capability than we imagined was considered ‘dumb’ at school for the past six years. This brings us to the question, whose inability is it? “The education system is broken because it puts the process at the center instead of putting the child at the center.”

Another childhood story, about exclusion rather than inclusion, was shared by Sriram Raghavan of “Andhadhun” and “Badlapur” fame. Not many know that the famed Bollywood writer-director used to stammer in school. When his turn came up in class to read aloud from the textbook he would get so nervous that he would inevitably stammer and his classmates would start laughing. Realizing that he would be bullied if he was asked to speak, teachers stopped asking him questions in class. But then came a teacher to teach German, and he would make it a point to ask the boy at least one question in every class. Over time Sriram realized that only in the German class his stammer would disappear. He still wonders about the different approaches that the teachers took: excessive sympathy versus relentless persistence. Finally, he overcame the stammer on his own, as an adult, late in life, when he had gained enough confidence in his abilities.

Rajni Bakshi ended the evening by reminding us that tennis originated as a game of friendship, not competition. The goal of both players was to keep the ball at play for as long as possible, to see how long one could keep the volleys going. In the same vein, Siddhant Shah, curator of the inclusive art exhibition, retold a story about the origin of the Olympics in ancient Greece. The games were played to nurture unity and togetherness. They believed that everyone wins when everyone plays. If anyone had a shortcoming the others would fulfill it, and the games were played naked so that nobody’s limitation was hidden. It was an ancient example of the spirit of inclusion.

Let me end with a poem:

“Without reason nothing does nature bring

A stone shines as a diamond when studded in a ring

Remember that everyone’s good at something.”