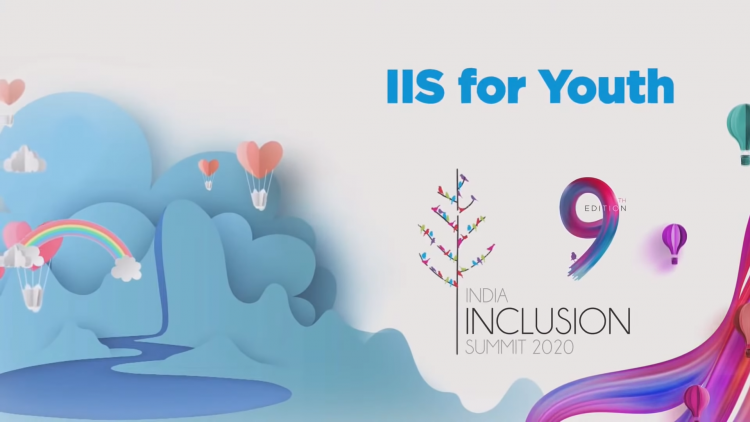 Just as eagerly as I wait for Diwali every year, I wait for the India Inclusion Summit in November. From attending the very first Summit in 2013 to progressing over the years from being an observer to making my small contributions to this event, it has been a beautiful journey in itself.

On 21 November 2020, I woke up enthusiastically and finished my morning chores so that I would be free to watch the 11 a.m. to 1 p.m. session on Inclusion for Youth. Just as IIS was going virtual for the first time, this was also the first time that a segment was exclusively devoted to youngsters, and many schools and teachers were expected to log on to watch. 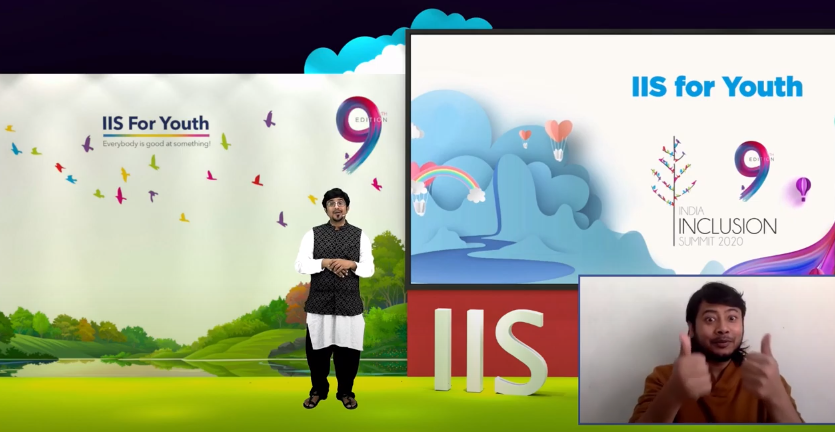 The morning session was anchored by Vikram Sridhar, Performance Storyteller and theatre practitioner. Vikram got things off to a lively start by inviting us to stretch our arms in what he called the “protractor asana”! He spoke about how a teacher had helped him conquer his speech impediment in school and follow his passion for the stage. He used the image of the rainbow to tie the session together, associating each story with a different colour and elaborating that just as a rainbow needs seven colors to come together, a beautiful world also needs us to recognise and appreciate the unique qualities of everyone around us.

Vikram first invited Megha Chakraborty, national blind-chess champion, to have a conversation with grandmaster Viswanathan Anand. The two played a game of rapid chess, after which Anand said that he was impressed with Megha’s ability to visualise the board and plan her moves. During their chat they discovered that they both had started playing chess at the age of six. The tips that Anand gave Megha on her game turned out to be valuable lessons that we can all apply in our lives — Be careful about what you do because you can’t take it back; don’t be disheartened by defeat and don’t take too much credit for success; focus on the next move without thinking of the previous one. 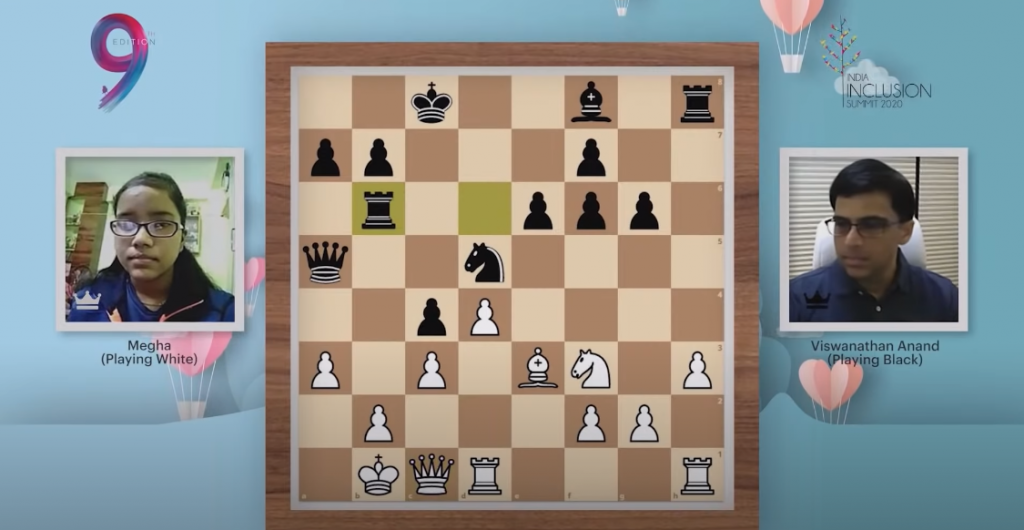 The next event was a panel discussion among four schoolgirls on a topic that was the theme of the summit: “Everyone is good at something”. The moderator was Karuna R. Shillai from Pine Mount School in Shillong. Sagarika Nair, a visually impaired student of Headstart in Bengaluru, shared how a few extra steps taken by her school ensured she was able to continue her education in a mainstream school. Ananya Jain from Doon Girls School in Dehradun mentioned how her school had provided her extra lessons to make sure her dyslexia did not come in the way of her being included with the rest of the class. Sridevi Jayashankar of Sudarshan Vidya Mandir in Bengaluru shared her journey of learning Sign language so she could provide support to her parents, both of whom were born deaf. It left me with thoughts on how I’ve made no effort to learn to converse with the Deaf, and why Sign is not a mandatory subject in schools. The children emphasized how their hobbies made them unique and how diversity adds value to the society. 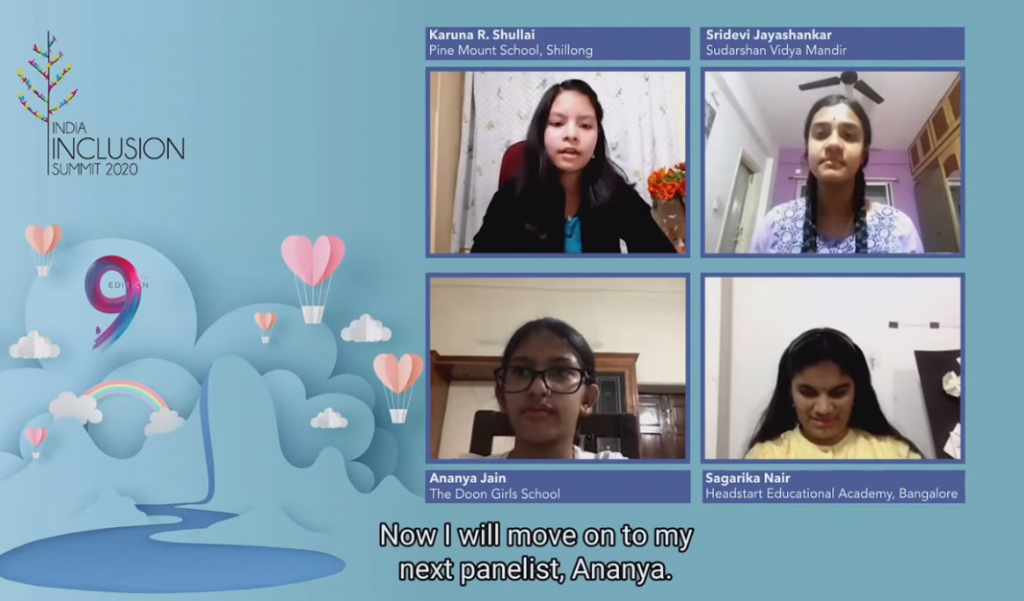 Next up was Vasu Dixit singing Yaari, a song composed by Ashwin Karthik, a successful engineer with cerebral palsy. Ashwin had composed the song as a tribute to his friend Bharat. One of the lines translated as “Our togetherness is a divine gift”. Tales of Ashwin’s and Bharat’s friendship, and Bharat’s support to Ashwin as they navigated the realities of life brought tears to many eyes. Their presence in each other’s lives had brought out the best in both of them. 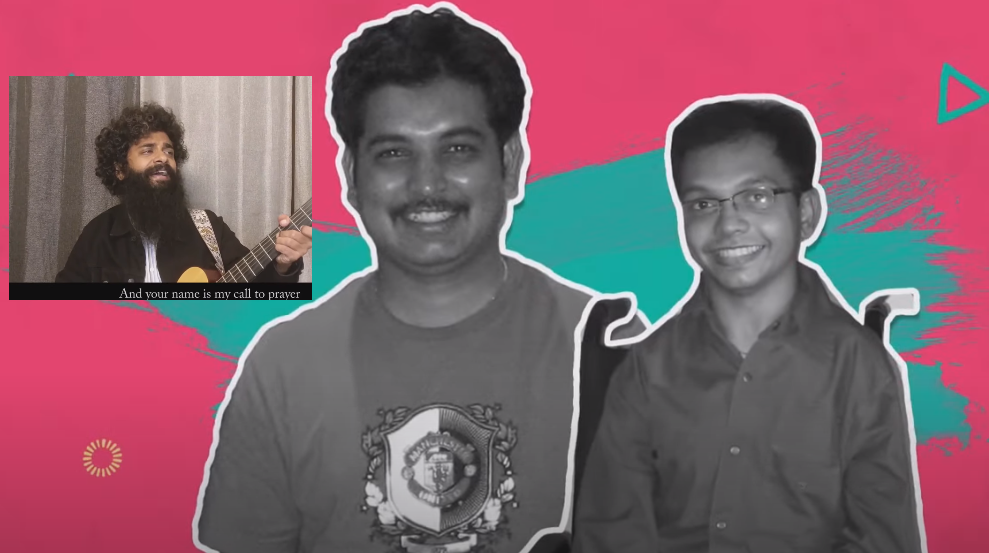 Rapper, singer and songwriter Sparsh Shah from New Jersey, USA who has Osteogenesis Imperfecta (commonly known as brittle-bone disease) is also a motivational speaker, and this aspect of him became starkly evident in the rousing talk he gave about disability. Citing world famous personalities from history who had disabilities, he highlighted how fortunate society was to have disabled people around. He not only encouraged persons with disabilities to look beyond their disability but also to be proud of who they were. Just as African Americans had taken ownership of the term ‘Black’ and non-heterosexuals the term ‘Queer’, there was nothing wrong in proudly taking on the label of ‘disabled’, he said.

Sparsh, who had experienced 130 fractures in his body, said, “I have chosen to make uncertainty my close friend,” pointing out that the disabled should be open to adapt to change. Finally he rendered the theme song of IIS, Aasman ke paar, adding his own rap lyrics and leaving the audience tapping their feet and resonating to his lines like “We are freer than birds” and “You may try to put us down but we will always rise”. 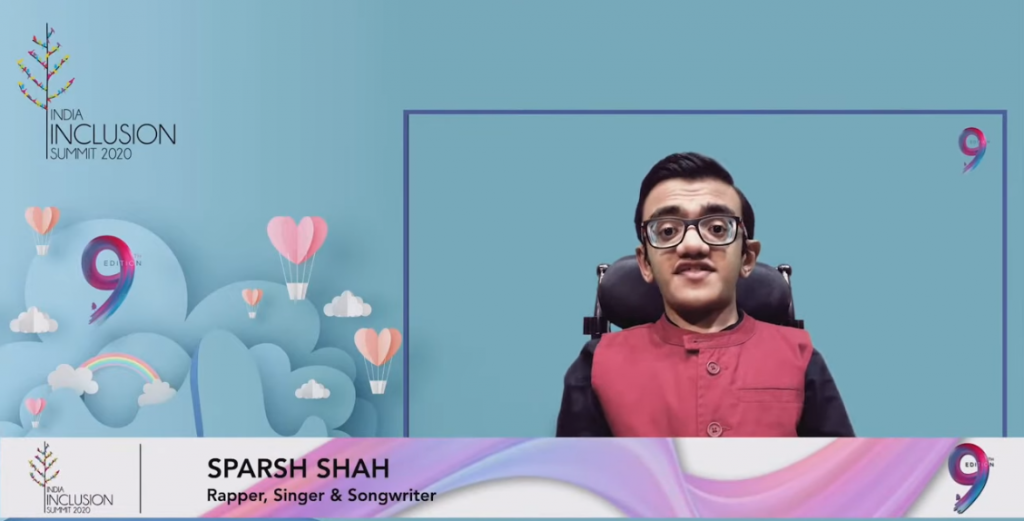 Pranav Bakshi, India’s first autistic male model, invited actor, producer and humanitarian Sonu Sood for a Q&A. Their topics varied from modelling to fitness to Sonu’s humanitarian work of helping migrants during the Covid-19 pandemic. Sonu’s humility and Pranav’s confidence in his superpower made for an enjoyable conversation. Pranav wanted to gift the coasters he had designed to Sonu, but Sonu offered to buy them so that the money would go to those affected by the pandemic. Sonu left the audience with an inspiring message: when we help another human being, we discover something special for ourselves. I felt moved by this statement and connected with it deeply. 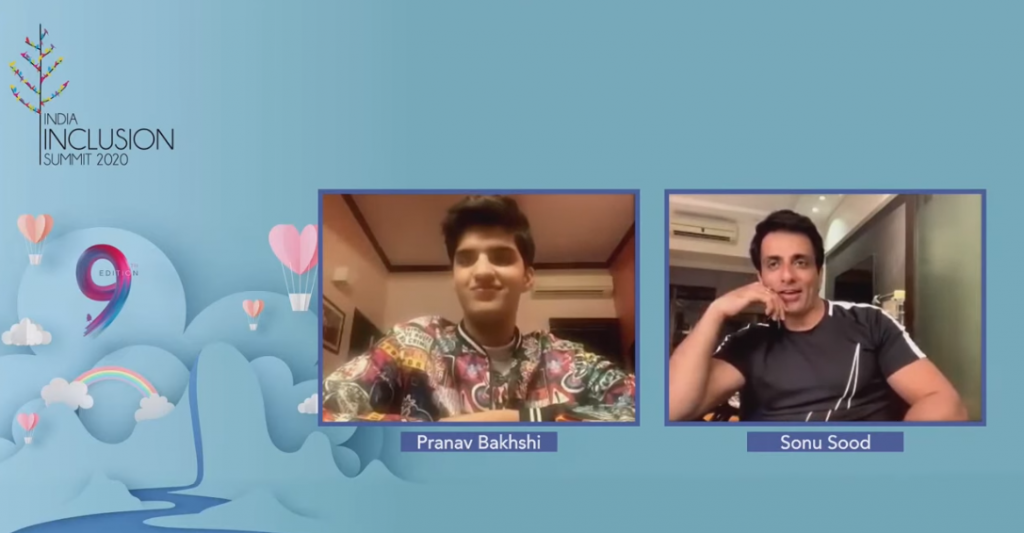 Vilas Nayak, India’s leading speed painter and Anu Jain, a gold medalist in Fine Arts were a joy to witness. Both self-trained artists, they created a beautiful art jugalbandi of pink roses and showcased how varied strokes can combine to create a single canvas. Vilas related how he had quit his software job in 2011 to become a fulltime artist. When Anu asked him about his plans, he said he had performed his speed painting in 36 countries so far and he wanted to reach the 100 mark. Both the artists expressed their frequent, lingering sense of dissatisfaction after they’d finished a painting, a feeling that they could have improved it. As Anu put it, “We are all students for life.”

Picture Description: Anu Jain in conversation with Vilas with the painting they created.

Closing the morning event was none other than V.R. Ferose, the brain behind IIS. Ferose encouraged the youth to think and work towards inclusion from that very moment. After all, the future lies in the hands of the young, and only if they imbibe the spirit of inclusion can they build a society where no one is left behind.

Disha Chhabra
Disha Chhabra, an IIM-Calcutta alumna and a product manager with Google, has authored three books including the national bestseller “Because Life Is A Gift” which inspires readers to understand the world of disability.