Getting creative with disability

The November 21 evening session of the IIS was a celebration of movies, music and art. The host, para-badminton athlete Neeraj George Baby, kickstarted the session by virtually unveiling a painting by Art For Inclusion 2019 Fellow Niyaz Hussain. In the painting, Niyaz expresses both the obstacles created by society and the power of self-belief. He portrays a standing figure of a person with a round belly who wears an eye-patch, holds a cane, and has braces on both legs. A second person in the painting represents society, which views persons with disabilities differently. 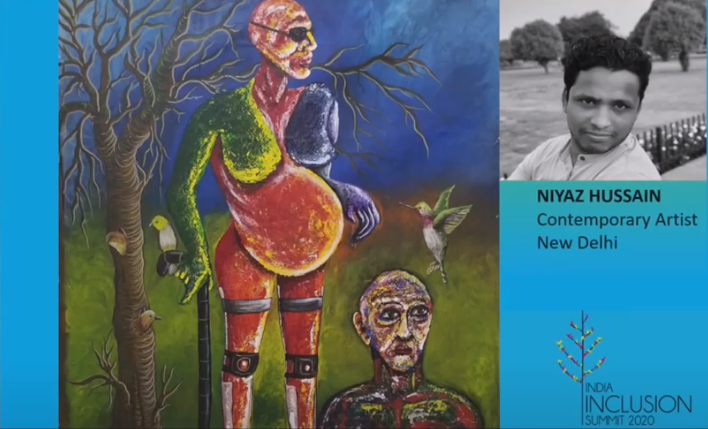 Neeraj first introduced American actor, director and producer Doug Roland who created the three-part event “The Feeling Through Experience”, inspired by the DeafBlind community and in partnership with the Hellen Keller Center (HKC) in New York. Doug made the 18-minute feature film Feeling Through based on his chance encounter with a DeafBlind man, Artemio, on the streets of New York. He also documented the search for Artemio and the process of making the film in a 24-minute documentary, Connecting the Dots. “The Feeling Through Experience” is a three-hour event featuring a fully accessible screening of both these films, followed by a panel discussion with members of the DeafBlind community. The event provides open captioning and audio description for the films, Sign interpreters on stage, and tactile interpreters for DeafBlind members of the audience.

Doug said that Artemio was the very first DeafBlind person he had met, nine years ago. During the course of their long conversation, with Artemio writing on a notepad and Doug tracing letters on Artemio’s palm, Doug realized what a “charismatic, funny guy” Artemio was. When he was scouting for a DeafBlind actor who would play Arty, the character in Feeling Through, he chanced upon Robert Tarango who was working in the cafeteria of the HKC. And Robert became the first ever DeafBlind person to act in a lead role in a movie. 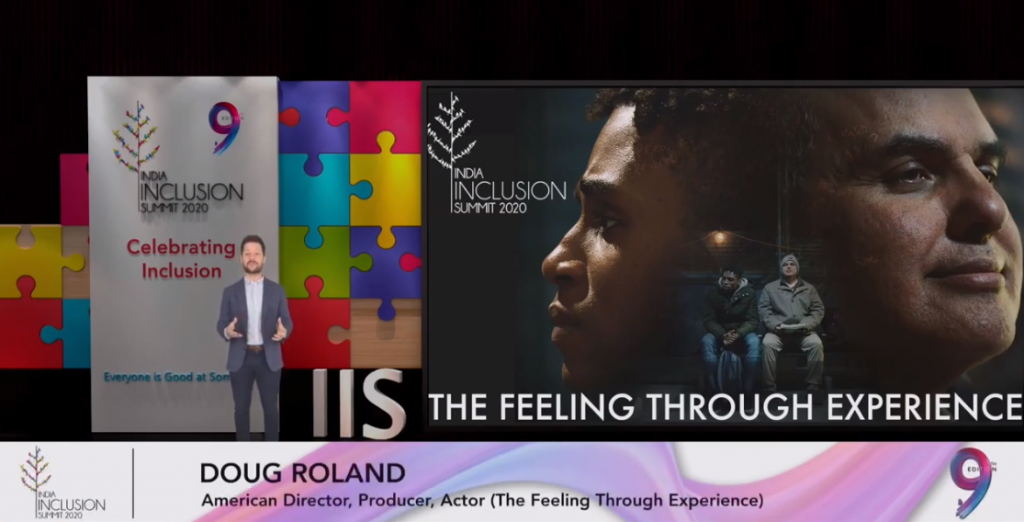 Following Doug’s talk, Neeraj, who’s an employee of the Advocate General’s office in Kochi, volunteered his personal story. At the age of nine he was diagnosed with a bone tumour in his leg that had to be eventually amputated. His first experience of inclusion was his return to school where everyone wholeheartedly welcomed and supported him. His passion for badminton turned into his profession, and his love of adventure culminated in his becoming a “crutch trekker” whose most recent achievement was to summit Uhuru, the highest peak of Mount Kilimanjaro. 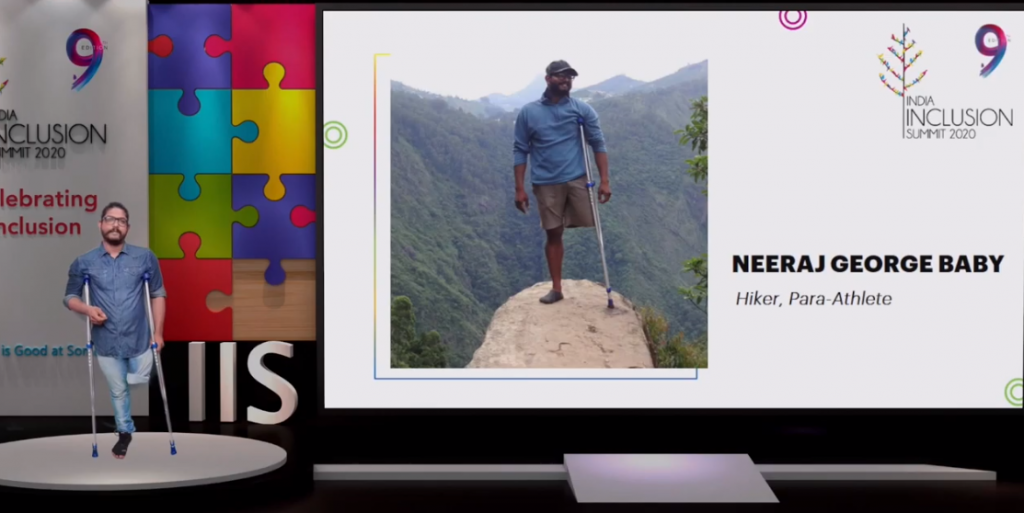 Neeraj invited American film director, producer and cinematographer Dan Habib to speak about his award-winning documentary Including Samuel based on his son Samuel who was diagnosed with cerebral palsy. Dan narrated his son’s journey through school and college (he’s now 20), and how his outgoing nature won him friends all along. He referenced a survey by researchers at Vanderbilt University that showed the benefits of an inclusive classroom. Two groups were surveyed: one with only average/typical children, and the other a mix of disabled and typical children. The results showed that students in the mixed group were academically rated 15 points higher than those in the other group.

If persons with disabilities can enhance the achievements of typical persons, they can also accentuate their positive qualities such as empathy and fellow-feeling. When Samuel was in primary school an immigrant child who didn’t speak English was a newcomer to his class. The other children immediately accepted the girl and made her feel welcome. The teacher told Dan that Samuel had caused this: he had taught his classmates how to include and embrace those who were different from themselves. Similarly, when Samuel and his friends went shopping in Cooperstown, New York they found that none of the establishments were accessible. The friends decided that if Samuel couldn’t shop, they wouldn’t spend their money there either. They wrote a joint letter to the civic authorities stating what had happened. Perhaps the letter played no small part in what happened in a few years: the whole of Cooperstown was made accessible! 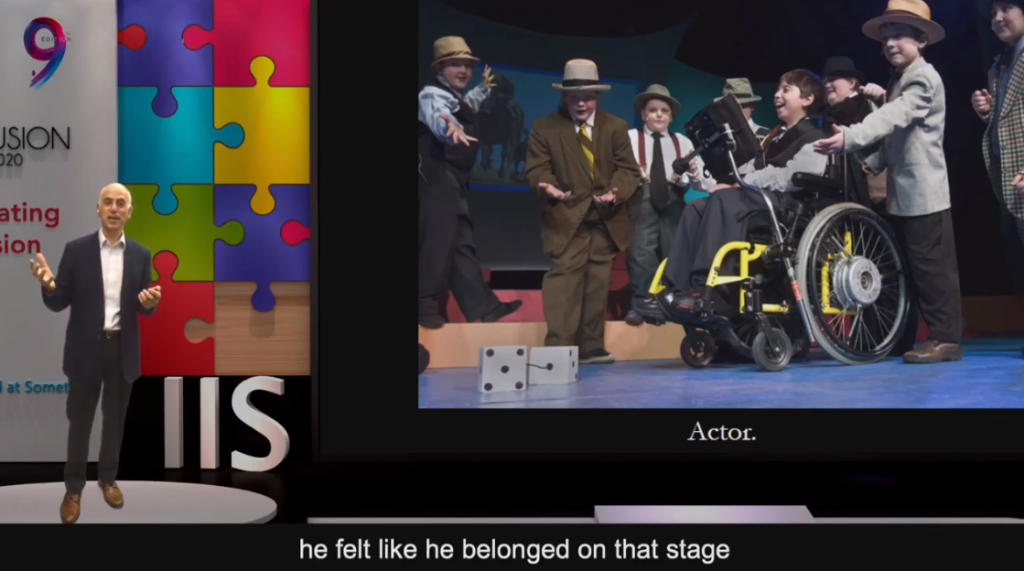 Born blind, Sahana Niren started giving performances when she was four. We were astounded to see that this child prodigy had mastered a range of musical instruments and was also good at singing. Starting with the IPL anthem, she then played the title track of Tamil chart-topper Dharalaprabhu on the keyboard, sang the evergreen Ilayaraja hit Ananta Raagam while playing the guitar, and played the devotional track Ekadantaya Vakratundaya on the veena. The plum on the wonderful cake was the theme song of Titanic sung to the piano. She put a full stop to her enthralling show with the energetic notes of Jai Ho on the keyboard. It was a mesmerising audio treat for the viewers.

Sahana was followed by the deeply dedicated filmmaker Pavitra Chalam. Founder of the Bengaluru production house Curley Street, Pavitra was attracted to documentary film-making because it is based on human connections, human bonds. The director of the award-winning Rooting for Roona and other films on disability said that she never moves on from any of her stories as they become part of her life. Her transparent answers to the rapid-fire conducted by Neeraj let everybody know that her friends used to call her ‘Pandish’ and her brother called her ‘Pandu Mani’, which refers to her love of the (animal) panda. 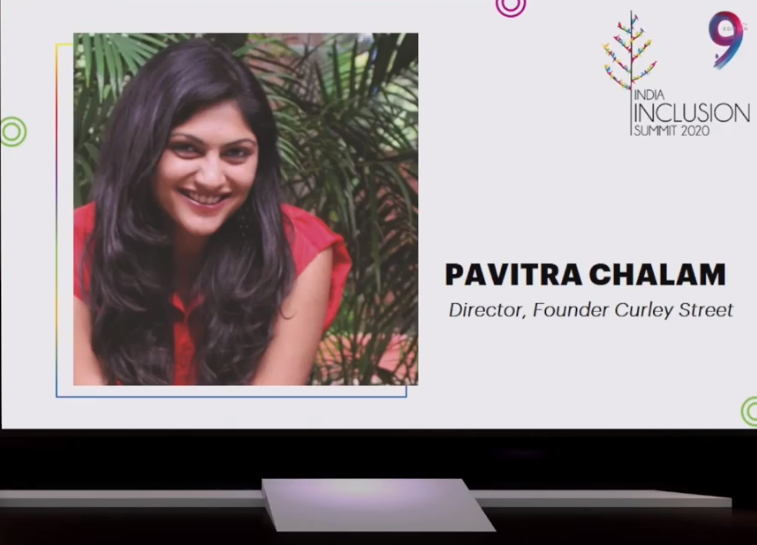 A talk by IPPY 2018 gold medal winner Rob Bernstein came next. The author of Uniquely Normal explained the Bernstein Cognitive Method for treating those with autism. His clients range from non-verbal children to high-functioning adults. In direct contrast to the reward-and-punishment method, he relates to them on their own terms and allows them to lead. He is a firm believer in using real-life situations to elicit change in language behaviour from within. 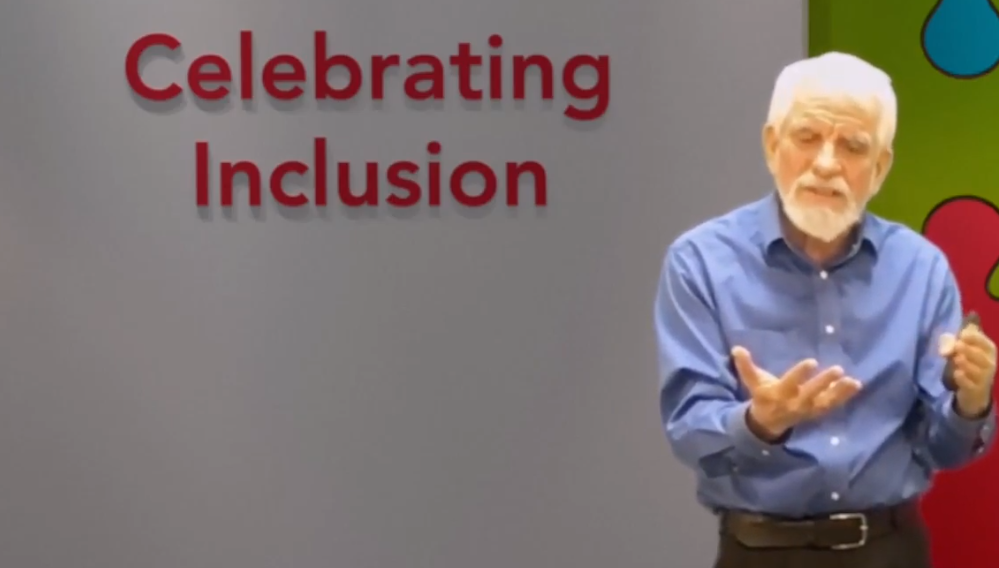 Next came a Q&A between IIS founder VR Ferose and the president of FTII, renowned film director Shekhar Kapur. Shekhar was of the opinion that movies are not only a means of storytelling but also can drive social change, and he gave the example of Bandit Queen and what happened to Phoolan Devi in real life. According to him, good movies can be watched multiple times and reveal newer, thought-provoking ideas with every viewing.

The final speaker was Prithvi Sekhar, who won a gold medal in the 2019 World Deaf Tennis Championship. Realising Prithvi’s keen interest in sports, his parents advised him to concentrate on individual games, and he chose tennis. In fact he was so in love with the game that after gaining an engineering degree and an MBA, he insisted on looking for a job that would allow him to play tennis. His proud parents Sekhar Laxman and Gomathi Sekhar spoke volubly about his achievements. They advised every parent with disabled children to allow them to choose whatever path they wanted to follow. 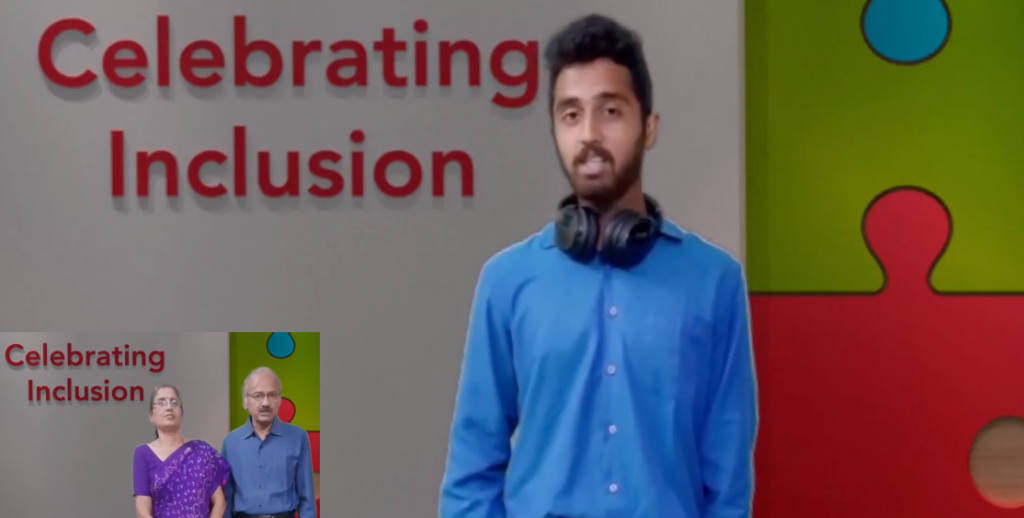 Dhanya Ravi & Siddharth TK
Dhanya Ravi is a freelance content writer and disability evangelist.
Siddharth TK is in the second year of his BSc course at Chinmaya College, Palakkad.