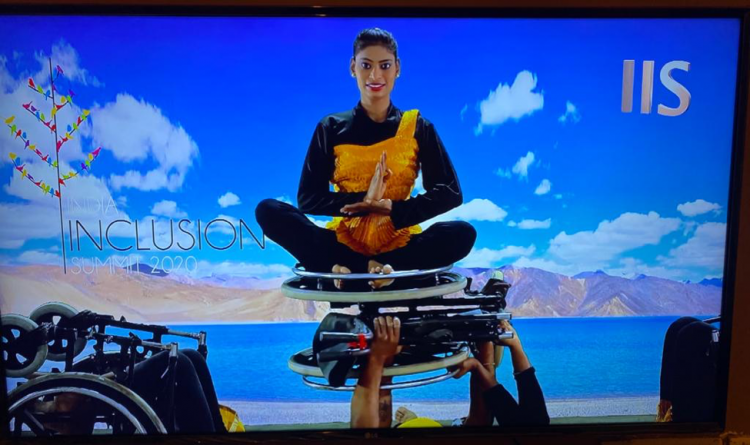 The year 2020 seems to have escaped out of a dystopian science fiction movie, but if we look on the bright side it has exposed us to the resilient side of the human race. What better platform to share lessons of resilience than at the India Inclusion Summit! The spirit of inclusion was celebrated on the virtual platform for the first time ever this year.

Wasting no time, the volunteer workforce got together like workaholic ant armies. They knew that it was no mean feat to sustain the attention of an audience that was already suffering from ‘virtual  meet fatigue’. The virtual stage’s look and feel, the technology used, registrations, every small detail was planned and tested to a tee. But all the great preparation would have gone in vain without a fantastic list of worthy speakers. The speakers chosen this year aligned perfectly with this year’s theme and were Resilience Personified!

Mansi Joshi, para-badminton ace who was recently on the cover of TIME magazine, hosted the proceedings of Day One. She kicked off IIS 2020 by introducing the newest and youngest member of the IIS family, Inclu the augmented-reality mascot. Inclu told everyone that his name is very special as it is the short form of inclusion, which means accepting everyone as they are and for who they are, without discrimination.

Mansi then invited the first speaker of the day, Nobel Laureate Kailash Satyarthi who has been tirelessly fighting against the oppression of children and young adults, and for right to education for all. He has rescued more than 80,000 kids from child labour, but there is a horrrifying fact that he shared: over 152 million kids today are subject to this kind of exploitation. Many of them have physical or mental disabilities and are even more ill-treated than others by their employers.

Kailash-ji quoted a Sanskrit verse from the ancient scriptures, the Vedas, to show that even the great sages had instructed the human race to create an inclusive society. He strongly emphasized the need for families, society and the state to create and nurture an inclusive ecosystem. Before ending his inspirational speech, Kailash-ji recognized the strong resolve of these young adults who deserve our deepest respect.

Next, Mansi narrated her journey. She said that when she graduated in 2020 as an electronics engineer she had the usual dreams that everyone has of getting a job, buying a vehicle, building a house, getting married and raising a family. Her first job was in an MNC in Pune and she travelled daily to her home in Mumbai on her two-wheeler. On 2 December 2011, on the eve of World Disability Day, Mansi met with a traffic accident that resulted in one of her legs being amputated. “All my previous plans went into hibernation,” she said.

After 45 days in hospital the slow process of rehabilitation began, first in a wheelchair and then by practicing to walk with her prosthetic leg. She got back to work, reconnected with friends and colleagues. Even before her injury, badminton had been her first love, a core part of her life since childhood. She began training and then took part in corporate tournaments where she played against ‘able-bodied’ players, although she wasn’t satisfied with the consolation prizes she was receiving! She took her game to the next level, won her first game against a non-disabled player, and then proceeded to garner a slew of medals in national and international para badminton tournaments. She quit her job and started training as a full time para-athelete under badminton legend Pulela Gopichand. A gold medal in 2019 at the World Championship in Switzerland was her crowning glory. Now there is a Barbie doll of Mansi as part of Mattel’s Sheroes series that honours role models!

Next on the virtual stage was Young Global Leader Neha Kirpal who gave us some dire statistics about the state of mental health in our country: every hour a student commits suicide somewhere in India; we have one-third of the world’s cases of depression; and there’s a 95% gap in clinical treatment for mental illness. Neha runs a tech start up that works towards building holistic solutions to treat mental illness and nurture mental health. She shared the story of her own life: how she was only five when her mother was diagnosed with schizophrenia, how her family struggled with mental health problems over two generations, and her brother committed suicide just a month ago. Change will come only if people start talking about mental health, said Neha, and she herself is an exemplar in that respect.

Anyone who has appeared for the UPSC exams would agree that it’s a draining experience. IAS officer Ira Singhal called it torture! She is the first person with disability to top the UPSC exams, but would you believe she had to undergo this ‘torture’ no less than four times? Narrating her story, Ira, who has scoliosis (unnatural curvature of the spine) which impairs the movement of her arm, said she was happily working for Cadbury after finishing her engineering and MBA when the UPSC bug bit her. She had always aspired to be in a profession where she could make a difference to society. In 2010 she quit her job and sat for the UPSC exam. She cracked it in the first attempt, but to her shock her name wasn’t on the service allocation list. Persons with disabilities are eligible for reservation for specified civil service posts but Ira’s disability did not fall in any of the categories mentioned.

She filed a case in the Central Administrative Tribunal but by the time it was decided in her favour she had successfully cleared the exam and been refused an IAS post three times. On her fourth try, competing in the General Category (not ‘Reserved’) in 2014, she was the highest scoring individual in the UPSC exam, and as a topper she could no longer be denied her dream job.

Besides those who shared their personal experiences, there were experts who spoke during the session. One such was Dr Shekhar Sheshadri, leading psychiatrist and professor of the Department of Child and Adolescent Psychiatry in NIMHANS, Bangalore. Shekhar drew the attention of the audience to children with special needs, and how the Covid-19 pandemic had a disproportionate impact on this vulnerable population. Geetanjali Sarangan, the founder of Snehadhara, spoke on art based therapy and how art and well-being are inter-connected. American author and educator Ellen Petry Leanse extolled the virtues of slowness, ‘despacito’ in Spanish.

No IIS is complete without an offering of the arts, and Day One of IIS 2020 was no exception. We caught a glimpse of the virtual art gallery featuring the paintings of the Art for Inclusion Fellows, were entranced by the athletic wheelchair dance performance Miracle on Wheels, and enjoyed humorous short films on disability.

We can’t wait for Day Two to begin!

Ashwin Karthik
Ashwin Karthik S.N. is an Agile practitioner at Dell Technologies and a published author. He is the first Indian engineering graduate with Cerebral Palsy Quadriplegia as a disability.