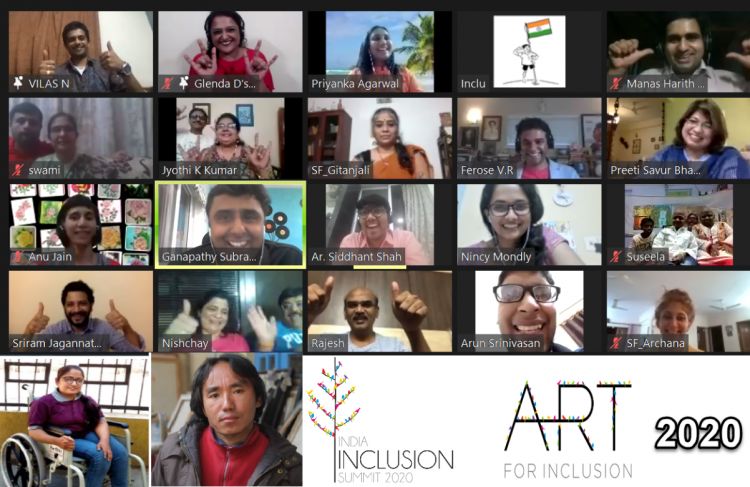 A placid lake, a bespectacled young wizard, gods and goddesses, light and darkness, zentangle art — Covid-19 shackled them all to a small screen. But the 2-D images broke free and sprang to life through poetry and dance at the launch of the Art for Inclusion (AFI) Fellowship 2020 on 30 October. 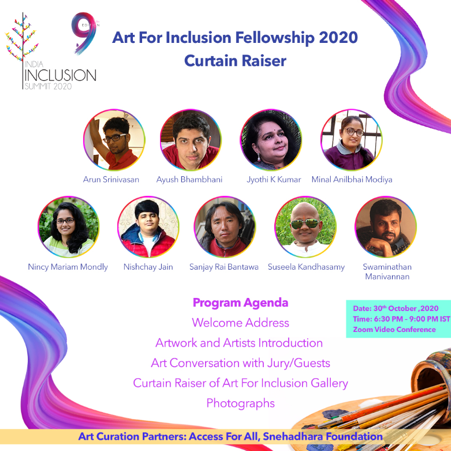 At this online curtain-raiser for AFI 2020, international speed painter Vilas Nayak click-started a digital art gallery that housed the exhibits of the nine artists with disabilities who won this year’s Fellowship. It won’t be a moment too soon when the pandemic eases and we can finally experience the physical artworks in a concrete space, on the lines of the pioneering AFI 2019 with its inclusive art exhibition designed for complete accessibility by award-winning architect Siddhant Shah of Access for All. 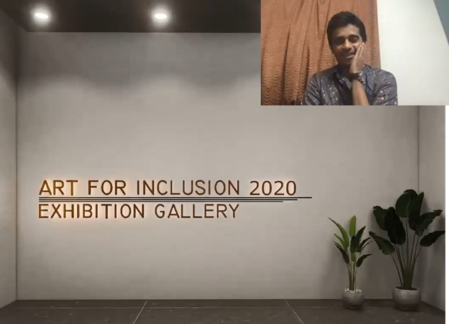 The curtain-raiser was hosted by Priyanka Agarwal and interpreted in Sign by Glenda D’Souza following an invocation by Manas H. The team from Snehadhara Foundation, which uses art based therapy for children and adults with special needs, welcomed each artist with a teaser intro. Dancer-choreographer Archana Kumar had composed short poems inspired by the paintings. As Gitanjali Sarangan intoned the lines of each poem, Archana would interpret it through movement; the name of the artist would be announced by Gitanjali only at the end of the brief performance. 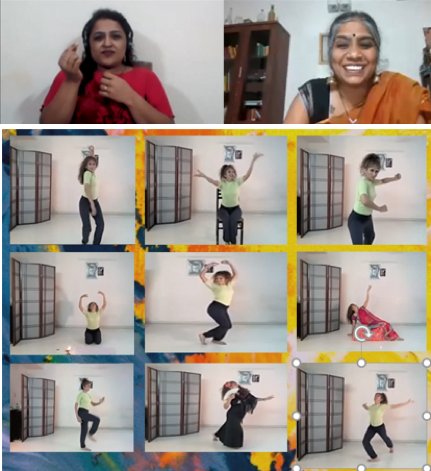 The artists, who had varying disabilities and came from different regions and backgrounds across the country, spoke about themselves and their paintings. A few have already attained some measure of worldly success: Chennai resident Swaminathan (‘Swami’) Manivannan’s work adorns corporate offices and has been used as logos and in calendars; Bengaluru-based Ayush Bhambhani’s zentangle art has been exhibited at the Outsider Art Fair in Paris and the Outsider Art Show supported by the Kochi Biennale Foundation; and Sanjay Rai Bantawa of Kathmandu, Nepal has had national and international solo exhibitions. But what every one of them has in common is simply this: art is the centre of their lives.

Some of them use art to express their experience of disability; for others it’s a means to conquer or rise above their disability. Art is therapeutic for some, spiritually healing for others.

Arun Srinivasan from New Delhi said nature inspires him and painting calms him down. “Nature and colour have healing power.” For his Calm Water he used orange, yellow, and red watercolours which are “vibrant and energetic” while the water itself remains still. Ayush gave us “A view into my mind”, an intricate pattern of zentangle art that could represent his thought processes. Nischay Jain from Noida, who displayed his watercolour portrait of Harry Potter, said he also does pencil sketches and inking, and works in oil and acrylic.

Jyothi K Kumar from Bengaluru used to draw landscapes until a friend suggested that she draw upon her own experiences. Deaf Cannot Hear Sounds contains images of numerous objects that create sound: machinery, several types of musical instruments, water gushing from a tap, fire crackers, alarm clock, whistle and so on. Prominent in the centre of the painting is an ear. Sanjay Bantawa’s white horse in his Power conveys the feeling that he, a wheelchair user, is “running, flying in the sky”.

“Art became a medium of communication for me and then it became a passion,” said Nincy M. Mondly from Thiruvananthapuram, Kerala who sustained a spinal cord injury in 2014 that paralysed her chest-level downwards. “I used to fill the walls of the physiotherapy room with my colourful artwork.” Her Being Love is done in black and white, showing the “dark and light sides” of a person, and conveying the message: “Accept yourself”.

It is perhaps unsurprising that the disabled, who are often rejected by society and struggle to accept themselves, create art in which the all-embracing divine becomes a recurring theme. Minal Anilbhai Modiya from Rajkot, Gujarat, is a sketching and rangoli artist; her Shakti-Shiva is a composite face of both deities. Swami has captured the Shore Temple of Mahabalipuram in pen on paper. Suseela Kandhasamy’s colour-filled Sacred Sanctum shows the goddess surrounded by multifarious forms of life — plants, animals, reptiles and other creatures — to denote that “god lives in everything and everyone”.

Suseela, the 25-year-old daughter of a handloom weaver in a village in Salem district, Tamil Nadu, exemplifies the ‘ripple effect’ of the AFI initiative. She had visited IIS 2019 and was tremendously inspired by the AFI exhibition. She met and was advised by 2019 AFI Fellow Anu Jain, gained ideas on how she could improve her art, and was helped to groom her skills.

Anu was a jury member for the 2020 AFI Fellowship along with Vilas Nayak, graphic artist Sriram Jagannathan and art curator Abhishek Poddar. They took on the onerous task of going over the 21 shortlisted entries of the total 46, rating the work on two scores: art quality, and disability challenge. At the virtual launch, Sriram, Vilas and Anu vehemently expressed how they had struggled to finalise the list of Fellows. There are unseen stars twinkling around the nine gems on display, all fired by the same passion. Who knows but we may see them in the years to come!

C.K. Meena
C.K. Meena is a Bengaluru-based journalist, columnist, and a published author of three novels.